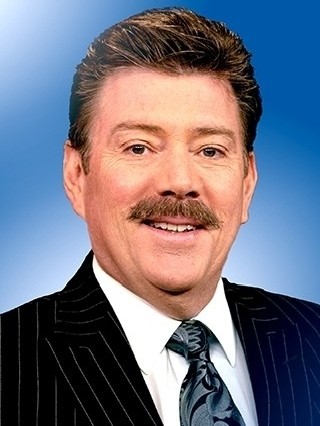 Ralph Wood joins Fox42 while serving as the longest-running television sportscaster in the history of the Fresno television market.

The KMPH TV sports director and nightly sports anchor of the FOX 26 Ten O'Clock News is a graduate of the University of Southern California with a degree in broadcast journalism.

He began his television career at the NBC affiliate in Reno, where he served as weekend sports anchor, general assignment news reporter and news anchor.

Prior to joining KMPH, he worked as weekend sports anchor and reporter for KJEO TV, the CBS affiliate in Fresno. While covering a news story for KJEO in 1985, he was offered the role of a reporter in the CBS network mini-series, "Fresno", starring Carol Burnett, Dabney Coleman, Teri Garr and Charles Grodin. The mini-series aired in November, 1986.

After serving as the television play-by-play announcer for Fresno State football and basketball for 15 years, he is now the sideline reporter for Bulldog football broadcasts on ESPN 940 AM.

He has covered Fresno State football at the Las Vegas Bowl, the Freedom Bowl and Kickoff Classic in Anaheim, the Humanitarian Bowl in Boise, and the Aloha and Hawaii Bowls in Honolulu in addition to Fresno State's five appearances in the California Bowl. He has also been there for the Fresno State basketball team's trip to the NIT in New York, as well as all of the Bulldogs' appearances in post-season conference tournaments, along with the NCAA tournament.

He was raised in the Los Angeles Harbor community of San Pedro, California, and is married with two children.